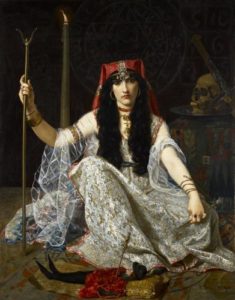 A sorceress who dabbles in pharmakeia (spells, magic, potions, and elixirs)

4th century B.C.:  study of the medicinal properties of plants

1241 A.D.:  the first pharmacy in Europe opened and is still in operation

Greco Roman Culture: Temple priestesses or oracles often used potions to attain a physical state to reach the gods. The Greek term pharmakeia was associated with magic potions, medicines, and poisons. Such drugs or poisons were commonly used for aborting babies and infants. Since infants had no legal standing until claimed by a family leader, abortion and infanticide were commonly practiced. However, sorcery became a serious offence in Roman law.

Old Testament: The Greek term pharmakeia was associated with the use of medicine, drugs, or spells. This also involved the practice of magic for good and evil ends.  Sorcerers produced potions and elixirs to treat illnesses. Sorcerers also produced potions (drugs) to poison others. The casting of spells were used to connect to the realm of demons and the occult. Sorcery and witchcraft both became associated with talking to demons and evil spirits. Stand fast now in your spells and in your many sorceries (Isa.47:12). What peace, so long as the harlotries of your mother Jezebel and her witchcrafts are so many? (2Kgs.9:22).

New Testament: The culture of the New Testament mirrored the values of the Old Testament. Sorcery was a grave problem when Paul wrote his letter to the Galatians. In talking about freedom, Paul makes the distinction between living in the Spirit and gratifying the desires of the flesh. In Gal. 5, it is interesting to note that sorcery (potions) were included among the serious sins of the flesh. Sorcery involved the administration of drugs, poisons, potions, and spells. The immorality, impurity, and licentiousness (around the pagan temple grounds) would have no doubt have contributed to potential unintended pregnancies. Although not explicitly stated, potions would have been used for contraceptives (abortifacients) to “treat” unwanted pregnancies. It was known in the first century that potions were mixed to prevent or stop pregnancy. Soranus of Ephesus, a 2nd century physician, is called the “father of gynecology.” He refers pharmakeia to abortion drugs. Paul was speaking of the evils of this drug use.

Sorcery included the administration of drugs, potions, and spells.

“No light from a lamp will ever be seen in you again. No voices of bride and groom will ever be heard in you again. Because your merchants were the great ones of the world, all nations were led astray by your magic potion.” Rev.18:23

This scripture speaks about Babylon (Rome). Babylon uses sorcery to deceive the nations. Rome is being condemned for her immorality, sorcery, and deception.

“No did they repent of their murders, their magic potions, their unchastity, or their robberies.” Rev.9:21

We have people entrenched in serious sins. These sins include sorcery, immorality, and criminal behavior.

Reformation: In the 16th and 17th centuries, sorcerers and midwives were often viewed as witches. These persons, who may have often used elixirs, tonics, and potions, were thought to use these items in order to communicate with the occult. It was believed that accusing, denouncing, and burning witches and midwives were part of God’s command. Exo.22:17: “You shall not let a sorceress live” was often used as moral scriptural justification to burn witches at the stake. The Latin Vulgate described the sorcerer as a poisoner performing abortions on infants and children. 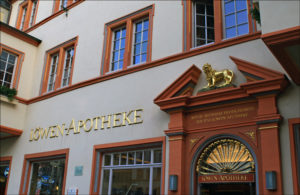 The pharmacy of the Lion, established in 1241, is still in operation in Trier, Germany. Trier is the oldest town in Germany

It is interesting to discover that drugs, potions, sorcerers, and the occult are tied together. It is not surprising that this term had a very negative meaning. Curiously, Exo. 22:17 only applied to female sorcerers, but not male sorcerers. Perhaps this attitude was attributed to the Old Testament patriarchal attitudes. So we can probably say that more female sorcerers (witches) have been put to death over the centuries.

As you know, the subject of abortion is almost always a very controversial subject to bring up. However, I only want to make note of the historical mention of abortion in early history. Paul did not specifically mention abortion in the scripture. As a Roman citizen in Tarsus, Paul would have already have been aware of the secular attitudes and practices towards abortion. It is significant to note that Paul includes sorcery (potions) as one of the deadly sins of the flesh. That Paul speaks against this practice provides the basis for the early Church’s already established teachings against the use of contraceptives (abortifacients). The early Church condemned anything which violated the integrity of marital love.

John Paul II, while visiting the US in 1987, said, “America, your very survival as a nation depends upon how you treat the weakest among you, especially the babies in their mother’s womb.” Now this issue has become front and center.

Perhaps it is not surprising that today pharmacists are the ones who have been legally licensed to dispense these products.