In China, company chops are mandatory for doing business, and replace signatures as used in Western countries. China Briefing explains the different types of company chops in China and the need for strong internal controls to ensure they do not get misused. 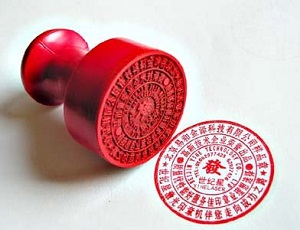 What are company chops?

In China, company chops – sometimes referred to as a seal or stamp – are mandatory for doing business and replace signatures that are used in Western countries. A company seal is the tangible representative and legal evidence of the company’s activities abroad.

The company’s person-in-charge or other management personnel authorized to hold the seal is only the temporary custodian of the seal. As such, the rights and obligations arising should be borne by the company, not the holder or custodian.

Foreign-invested enterprises (FIEs) must produce the company chop after registering with the Administration for Market Regulations (AMR). The company chop contains the full registered name of the company in Chinese and must be filed at the Public Security Bureau (PSB).

the 5 Main Types of Company Chops in China

Beyond the official company chop, a firm will likely need several chops – each for a different purpose and used on different types of official documentation – depending on its business scope. Regardless, every business should consider diversifying their use of chops.

There are five main types of company seals, and some others that can be applied in special situations.

For some chops, any person could be deemed as authorized to use it if it is in their possession. However, this will not be the case for every type of chop, as explained below, and warrants the need for clear internal controls to supervise their responsible use.

An official company chop is required when any important document is signed and can provide legal authority when opening a bank account or altering the name or business scope of the company.

The official company chop has the widest scope of use among all the seals and is a symbol of the rights of the legal persons.

All letters, official documents, contracts, and introduction letters issued in the name of the company, certificates, or other company materials can use the official chop, which will legally bind the company. However, under some circumstances, certain documents will be required to be stamped with a particular chop. For example, invoices which must be stamped with a special invoice chop.

The financial chop is used for opening a bank account, issuing checks, authenticating financial documents, such as tax filings and compliance documents, and for most bank related transactions.

It is a mandatory chop, though the company chop can often be used in its place. This is why companies will often keep their financial and company chops separate to avoid exposure to misuse.

The chop must be recorded with the PSB and the company’s bank.

The legal representative’s personal chop can be used in place of a signature, or alongside one. Upon registration, it must be recorded with the PSB, and the company’s bank.

Many companies use a separate contract chop for signing contracts with their employees or executing agreements between salespeople and clients.

While having a contract chop is not a statutory requirement, this chop can serve in place of the company chop when used for contracts.

The contract chop grants less authority than the company chop, making it useful for delegating authority.

The invoice chop is mandatory for issuing official invoices and tax receipts (fapiao). A chopped invoice is required to declare a purchase as a business expense.

An electronic chop is the digital equivalent of a given chop used for online transactions, including financial and contractual ones.

Since the release of the Electronic Signature Law of the PRC , which was last revised in 2019, electronic signatures, including electronic chops, have enjoyed the same legal status as physical seals.

However, to be regarded a ‘reliable’ electronic signature, and to carry legal weight, it must have the following characteristics:

Parties can generally agree upon the use or non-use of electronic signatures in contracts, or other documents and instruments in civil activities. Some exceptions exist, such as the signing of documents relating to marriage, adoption, inheritance, public utilities, and other documents as stipulated by law and administrative regulations.

The customs chop is used for customs declarations on import and export goods. It is mandatory for companies engaged in cross-border trade.

Other types of chops

Although only the company, financial, and customs chops (if applicable) are legally required, though various government departments may at times require other chops for specific purposes.

For example, a government department may require a document chopped with the company seal of the foreign investor’s parent company. This can create complexities, as the use of seals by many smaller corporations is not mandatory and is not part of the typical administration process.

However, in order to satisfy requirements, a seal may be procured, which should be countersigned by a recognized person on the board of the parent company. Chinese authorities will normally specify whose signature should accompany the document and seal.

In-house counsel for US or EU corporations should determine the legal use of chops and seals within their own domestic legal framework. The Chinese, in requesting seals and chopped documents, are merely imposing their own domestic administration rules to foreign companies without necessarily appreciating that foreign investors are not governed abroad by the same regulatory framework.

Recently, a spate of business disputes have surfaced in China, concerning the misappropriation, misuse or forgery of company chops— placing the spotlight on a long-held and powerful system that has very much been ingrained in China’s business culture.

In July 2020, Tencent Holdings Ltd was embroiled in a legal dispute with Lao Gan Ma, the famous Chinese chili oil maker, who was found to have reneged on a lucrative advertising contract with the internet giant.

According to multiple media sources, it was found that three people who had posed as chill-sauce makers’ representatives and had forged the company seal to secure the deal. The two companies have since issued a joint statement and declined to comment further.

In another case, U.K.-based company Arms Holding, acquired by the Japanese multinational conglomerate group Softbank in 2016, tried to terminate their China Head earlier this year. After the termination notice was sent, the ousted CEO was able to nullify the termination notice by issuing a company notice that was stamped with the chop and giving him legal grounds to continue running the China unit.

As demonstrated by the recent high-profile cases, the use and possession of a company chop in China yields immense power.

Accordingly, companies are advised to secure their chops and ensure that they are not used for illicit purposes or stolen by disgruntled employees.

Chops are not necessarily held by one person; in fact, in many cases different chops are used by different departments. For example, the company accountant uses the finance chop, while the in-house lawyer may hold the contract chop.

A company can also mandate that all chops be accompanied by the company chop should it wish to add another layer of protection. Chops are also usually accompanied by the authorized signatory, thus providing an additional layer of security over and above that used in the West, which tends to rely on signature alone.

Regardless, it is a sensible idea to have only trusted individuals possess chops as required, and to establish internal controls to regulate and log their use. With the exception of company owners, it is not advisable to give one individual control over all the chops and be signatory for all of them as well.

Further, given the importance of chops in China, companies are advised to conduct thorough legal and HR audits to ensure their internal controls are robust and minimize risks relating to improper usage of chops.