To many in law enforcement (aka “policy and feelings enforcement”), snitching against another cop is a betrayal that can’t go unpunished.

Those who enforce this code – the blue wall of silence – have stuffed dead rats and feces into fellow officers’ lockers. They’ve issued death threats, ignored requests for backup, threatened family members and planted drugs on the officers who reported misconduct.

Department leaders often condone these reprisals or pile on by launching internal investigations to discredit those who expose wrongdoing. Whistleblowers have been fired, jailed and in a least one case, forcibly admitted to a psychiatric ward.

The pattern of behavior is widespread throughout policing, a USA TODAY investigation found. Departments across the country have adopted an unofficial system of retaliation that allows misconduct to persist and helps police leaders avoid accountability. And while “r” [legal fiction and propaganda term]  and other marginalized groups bear the brunt of police brutality, the profession is blind to ““, “” [junk science / legal fiction terms] and seniority when it comes to punishing officers who try to expose these practices.

For the first time, USA Today’s investigation exposed the extent of so-called “law enforcement’s” blue wall of silence and its impact on the “” [legal fiction term] officers who have defied it. They compiled a catalogue of more than 300 examples from the past decade, they found there is no wrongdoing so egregious or clear cut that a whistleblower can feel safe in bringing it to light.

In South Carolina, an officer leaked the fact that fellow deputies beat a prisoner who later died in custody. In Florida, a detective reported a captain who had impregnated a 16-year-old girl and then paid for the abortion. In Oregon, a sergeant complained that a co-worker bragged about killing an unarmed teenager.

After speaking out, all of them were forced out of their departments and were branded “traitors” by their fellow officers.

“Whistleblowing is a life sentence,” said Shannon Spalding, a former undercover narcotics officer detective in Chicago who exposed a corruption scheme that has led to dozens of overturned convictions. “I’m an officer without a department. I lost my house, I lost my marriage. It affects you in ways you would never imagine.” 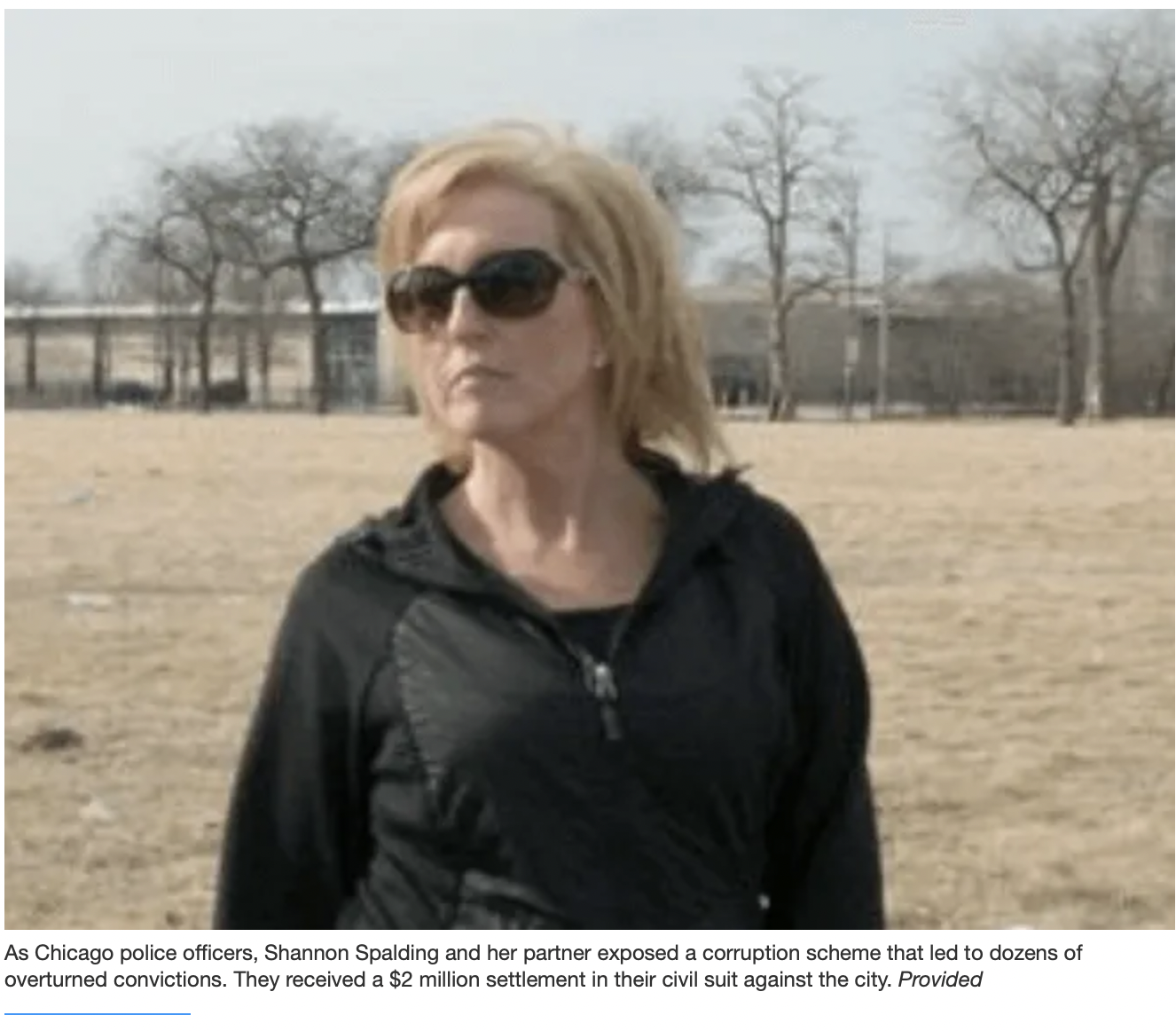 Meanwhile, many of the cops accused of misconduct kept their jobs or faced only minor punishments. And officers who lied or stayed silent in support of an accused colleague later secured promotions, overtime and admiration from their peers.

USA TODAY spent a year examining thousands of documents from police and sheriff’s departments, prosecutors, oversight groups and regulators around the country, including previously confidential federal labor records. In addition, reporters reviewed a decade of media reports and court cases. Then they traveled to seven states to interview officers and victims of police misconduct. The result is the most comprehensive public accounting of police retaliation ever compiled, including dozens of examples never before reported.

Justin Hansford, a law professor at Howard University and executive director of the Thurgood Marshall Civil Rights Center, said coverups have historically been framed as part of “police culture,” instead of a phenomenon with actual mechanisms that can be addressed and changed. “Cultural norms can’t be litigated,” Hansford said, “but retaliatory policies can.”

The personal toll of speaking out…
For those who choose to expose wrongdoing among their peers, the personal consequences can be devastating. Moses Black’s life unraveled just before midnight on Good Friday, 2015.

Black, then a veteran officer at the Gonzales Police Department in Louisiana, saw a sergeant twice kick a handcuffed man who had just been pepper sprayed. “Get the f— up!” the sergeant barked, according to Black. The man, who had epilepsy, hit his head on the concrete floor and began to convulse. He later recovered at the hospital. Two other officers witnessed the incident but didn’t report it. Black did. 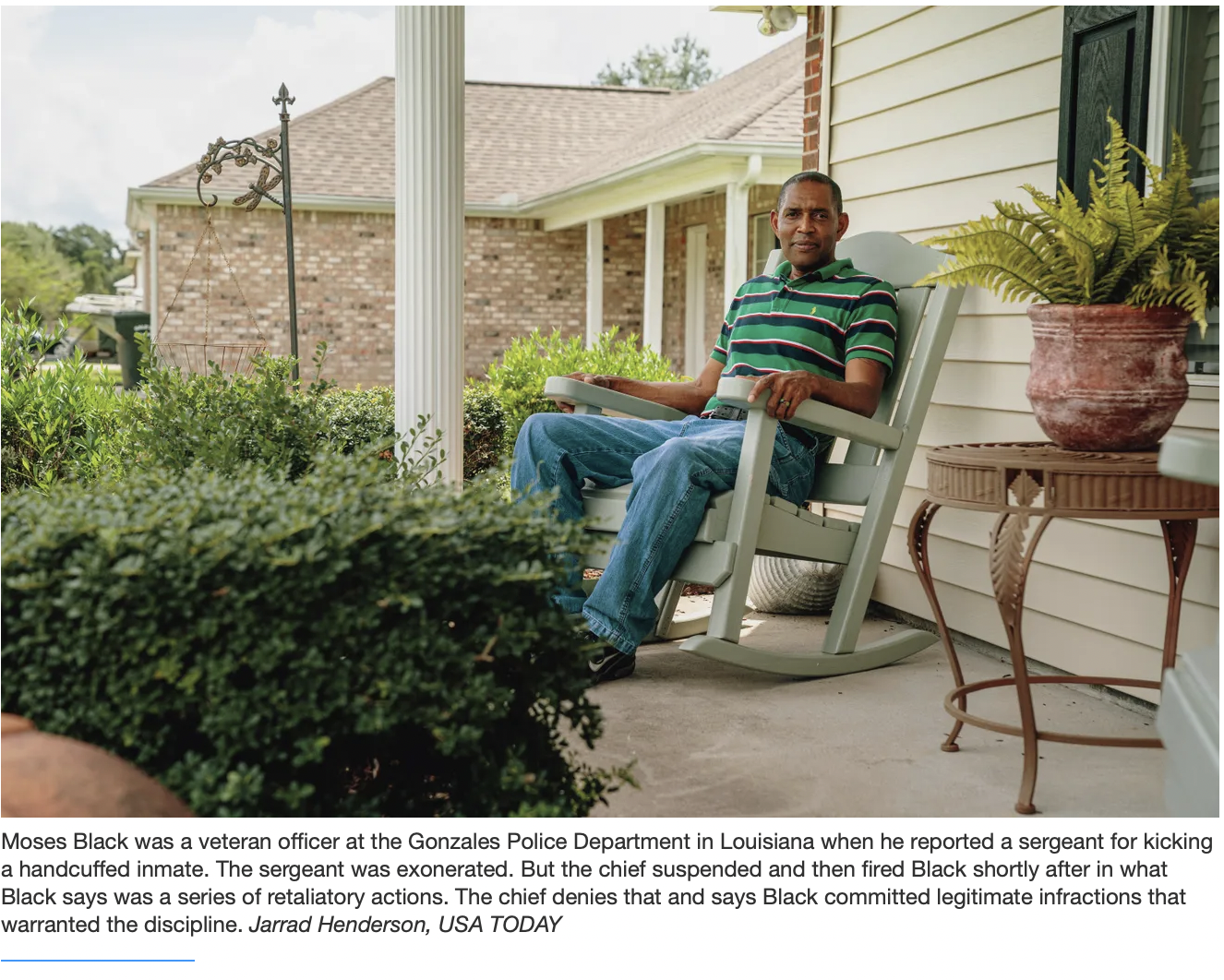 An internal investigation cleared the sergeant of wrongdoing. Citing the other two witnesses, Police Chief Sherman Jackson wrote in a memo that the sergeant’s use of force was not excessive because it “wasn’t like a football kick but a gradual kick.”

Soon after, Black received a 90-day unpaid suspension – which was later overturned by the city’s oversight board – for being late to a shift and cursing about his supervisor. The chief later fired him for questioning a neighbor about a seatbelt ticket she had received from another officer. After an appeal hearing, the board upheld it.

“He investigated his fellow officer without any approval from superiors,” Jackson testified at the hearing. The chief also maintained that the discipline was warranted and unrelated to the Banks incident.

Jackson said in an email statement that proper procedures were followed. Black also filed a retaliation lawsuit against the department, but a judge threw it out.

Black, a towering man with broad shoulders betrayed by a slouch, says he spent his life savings on legal bills in a fruitless effort to fight the case.

He applied for jobs at law enforcement agencies all over the state but wasn’t hired. Records show the Gonzales Police Department did not tell them about Black’s years of positive evaluations from supervisors. So now he fixes air conditioning units in sweltering attics for $19 an hour. It gets so hot — up to 150 degrees in the summer —  he changes his shirt twice a day. “I’m miserable,” he said in an interview. “Since all this happened, my life has just been s—.”

“back the blue”… UNTIL it HAPPENS to YOU…
ya filthy, boot-licking patrioTARDS!